The term “multi-touch” is now in common use to describe any touch screen that can recognize more than one point of contact; in effect the use of two or more fingers simultaneously. Multi-touch is considered by many to become a widely-used interface mainly because of the speed, efficiency and intuitiveness of the technology. However, there are now several different types of multi-touch, technology. Below is an explanation of the different types of multitouch technology available which also acts as a guide for the terms we use for describing the touch screens we supply.

An infrared touchscreen uses an array of X-Y infrared LED and photodetector pairs around the edges of the screen to detect a disruption in the pattern of LED beams. These LED beams cross each other in vertical and horizontal patterns. This helps the sensors pick up the exact location of the touch. A major benefit of such a system is that it can detect essentially any input including a finger, gloved finger, stylus or pen. It is generally used in outdoor applications and point of sale systems which can not rely on a conductor (such as a bare finger) to activate the touchscreen.

Unlike capacitive touchscreens, infrared touchscreens do not require any patterning on the glass which increases durability and optical clarity of the overall system. 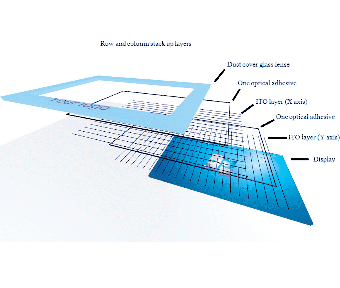 Since capacitive screens are made of one main layer, which is constantly getting thinner as technology advances, these screens are not only more sensitive and accurate, the display itself can be much sharper, as seen on devices such as the iPhone.  PCAP may be used for screens under 42″, however, it’s significantly much more expensive when compared to other touchscreen technology. 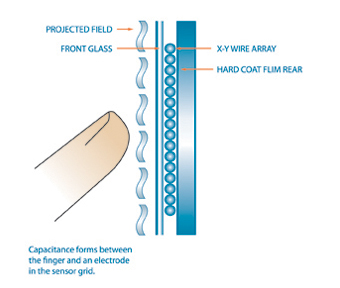 Resistive screens have been improving greatly over the years, and today many lower-end smartphones boast a resistive screen which is no less accurate than high-end devices. 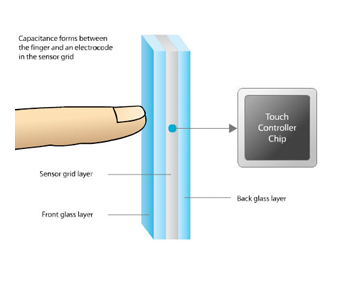 Projected Capacitive Touch (PCT or PCAP) technology is a variant of capacitive touch technology. All PCT touch screens are made up of a matrix of rows and columns of conductive material, layered on sheets of glass. This can be done either by etching a single conductive layer to form a grid pattern of electrodes, or by etching two separate, perpendicular layers of conductive material with parallel lines or tracks to form a grid. Voltage applied to this grid creates a uniform electrostatic field, which can be measured. When a conductive object, such as a finger, comes into contact with a PCT panel, it distorts the local electrostatic field at that point. This is measurable as a change in capacitance. If a finger bridges the gap between two of the “tracks”, the charge field is further interrupted and detected by the controller. The capacitance can be changed and measured at every individual point on the grid (intersection). Therefore, this system is able to accurately track touches.

Unlike traditional capacitive touch technology, it is possible for a PCT system to sense a passive stylus or gloved fingers. However, moisture on the surface of the panel, high humidity, or collected dust can interfere with the performance of a PCT system. There are two types of PCT: mutual capacitance and self-capacitance.